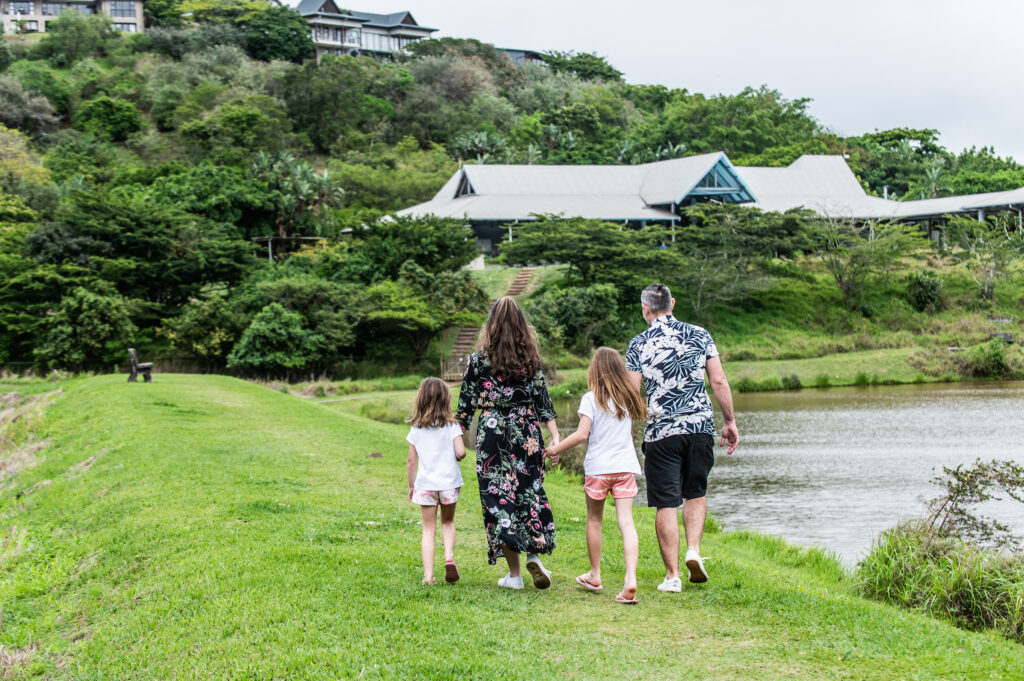 Simbithi is just beginning to wake up on a cool Saturday morning…and, by the looks of it, so is Dominic. “He’s on auto-pilot,” Jenna gives her husband, whom she affectionately calls ‘Dom’, a solid pat on the back. “You’ll survive, babe. Go on.”

Dominic lets the couple’s daughters out and they bounce into the Kingfisher Community Centre. He gives Jenna a cheeky grin and she winks back. It is a thing to behold: a couple so comfortable with each other. But, then, they have been in each other’s’ lives for around two decades. “I was born in Northern Ireland,” Jenna shares. “And, my parents moved to Johannesburg when I was a baby. When I was 14, we moved to Durban.”

She met Johannesburg-born Dominic, then, as they moved around the same group of friends, who are still their best mates, today. Jenna, a Danville girl and Dominic, a Northwood Knight recall that they were not childhood sweethearts. “But, I loved him to bits even then, and wished we could be. Alas, not to be…then, anyway!”

After completing Matric, Jenna took a gap year overseas and, when she returned, her and Dominic’s paths crossed again. “This time, we actually did get together just after New Year’s in 2000.” The couple moved to London, where they lived for 10 years and where they became engaged. “We decided to get our nearests and dearests to all go away on holiday to Mauritius, where we got married.”

Isabeau was born in the UK a few years later and the da Costas moved back home in 2014. Allegra completed their little family in 2015. The da Costas regularly visited Simbithi to holiday with Dominic’s family. His father, Pedro, is a well-known face on the Estate. “My father was one of the earlier residents, so we always knew about Simbithi, almost from inception. We were living in La Lucia but were keen to look around the Estate.”

Jacana, in its early stages, won Jenna and Dominic over immediately. “We saw the floor plans and put down a deposit,” Jenna recalls. “It took around two years for our home to be ready and then, suddenly, we were moving to Ballito!”

Dominic moved to Simbithi first and, he remembers with a chuckle, gave Jenna a “three-month veto” on life up north. “She didn’t need it, though,” he shakes his head. “She was sold pretty quickly, once she got here with the girls.”

He remembers the first evening he spent at the Club, the day he moved in. “We were out on the deck with a few drinks, live music and a brilliant vibe and I thought, this is exactly what I pictured. That postcard life.”

Simbithi lends itself to Dominic and Jenna’s post-COVID-19 normal, as they work together from home. Dominic has a background in software and app development. “The company I worked for closed its doors in December 2019, just before the start of the pandemic, so I went solo. Jen joined me nine months later, and, with her experience in marketing and advertising, handles the content creation and management side of our business.”

Life in Jacana is idyllic for their daughters, which Jenna sincerely appreciates. She shares how “girl-heavy” Jacana is while Isabeau and Allegra – or Beau and Belle to their parents – race each other along the Heron dam wall. “They are part of a crew of girls who have formed such lovely friendships in our little neighbourhood. Our children are socialites,” she laughs. “We know our neighbours well, and if the girls are playing outside, Dom and I have no doubt that they’re safe.”

Dominic, who recently took up fishing, agrees. “Knowing my girls are safe is a big priority for me. The lifestyle we have at Simbithi is great for our family, and we love living on such a well-run, beautiful Estate.”