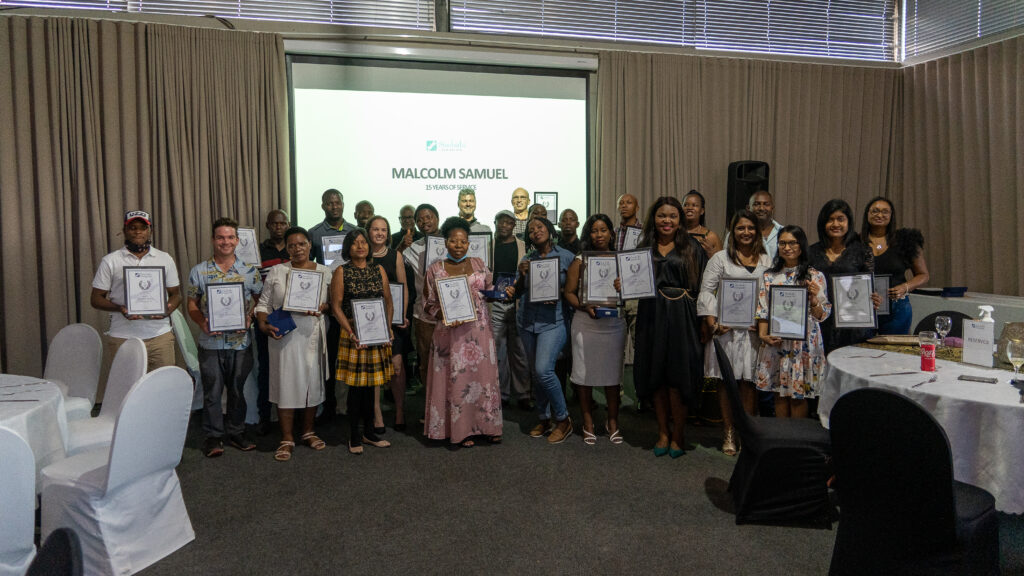 We often say that Simbithi is a magical place. One only needs to meander on a trail, have a picnic on a dam wall or stand on the magnificence that is the 17th green in early morning light to be reminded of that. But what keeps Simbithi magical are the hearts and souls of those who pour their passion, loyalty, and dedication into the Estate every day.

We hosted our annual Night of the Stars in early February, honouring the long-serving employees of SEEHOA and the Country Club. Those with five, 10 and 15 years of service – a combined tally of more than 250 years – were congratulated and thanked for their exemplary work.

Chairman, Jeff Leaver expressed his appreciation to the partners of those receiving awards. “You, too, are to be applauded for supporting our team as they do their best for Simbithi,” he said. “I am amazed that we have so many employees receiving awards, this evening. It is testament to the solid management at Simbithi. Well done to all.”

Human Resources Director, Bright Nkosi urged recipients to keep their hearts close to Simbithi. “Indeed, this is one of the top estates in the province and that is because of you, who serve with excellence. The board’s goal is to make Simbithi the best estate in the province and, perhaps, even the country. With a team like you, it’s a goal we can surely achieve.”

General Manager Malcolm Samuel shared poignant memories of his 15-year journey with Simbithi. “When my family and I moved here, for me to begin my work at Simbithi my children were one and six years old. Now, my daughter is in her final year of university and my son is entering his last three years of high school,” he said. “I share this not only because I’m a proud father…I have seen your children grow up, and you have seen mine grow up. I say this because this team being awarded tonight is the foundation of what is being built at Simbithi. Thank you for being part of our story.”

Club General Manager Craig Nell delivered a heartfelt tribute to his team. “Each of you plays an important role at Simbithi Country Club. Whether you’re here first in the morning to switch the lights on, or whether you’re the last to lock the doors before we leave. I am so, so proud of you.”

Congratulations to our awardees!