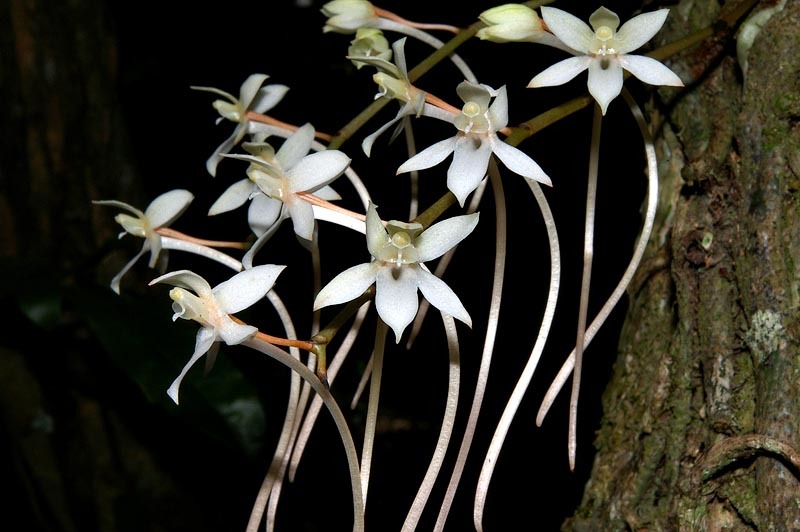 How fortunate we are on Simbithi, that the few patches of swamp forest were left untouched and preserved by Mannie Ladlau and his forbears.  On my first visit to friends living in Simbithi, they took us on what came to be known as the Mngeni trail. I was absolutely enchanted and, unsurprisingly, it was only a few years later that we found ourselves happily celebrating our very good fortune of having secured a site of our own on Simbithi!

A decade of living here and the Mngeni trail is still a favourite walk of mine, not least because of the enormous Waterberry (Syzygium cordatum) trees found along the western edge of the Llongwe wetland.  Look up into the branches of these ancient, truly majestic trees and you will be rewarded with seeing several species of epiphytic (tree dwelling) orchid.

These are some of the orchids you may be able to spot:

This beautiful miniature orchid is also found in Zimbabwe, Mozambique, Malawi and Zambia. Despite its smallish size, the spear shaped fleshy leaves can reach a maximum length of 15cms, it is quite a robust plant with strong roots that attach to the bark of the tree. They are fairly common in our subtropical coastal and swamp forests and always found on branches in deep shade near streams. Between February and April the plants send out long flower spikes that generally hang down. For high-up specimens you will need your binoculars to clearly see the beauty of each of the many white flowers on each inflorescence. Each flower has a long spur and on a calm evening the sweet scent is unmistakeable on the trail below. This plant may be legally purchased online at https://afriorchids.co.za/

These plants usually form fairly large clusters and not only grow on trees but also on rocks (lithophytic). Found in our forests and even in drier scrub, they are not dependent on being near streams or rivers. The leaves are strap shaped and leathery and the flower spikes hang down with the largish flowers (50mm in diameter) each having a long, curved spur between 2 and 6cms in length! When the star-shaped flowers first emerge, they are cream coloured but slowly age to orange. Like the former species, they are sweetly scented at night and are used as a Zulu love charm. All of our South African orchids are protected by both South African legislation and CITES regulations.  You may not pick or remove plants or flowers but the local Inhle orchid Nursery does sometimes have specimens for sale and this species is reputedly easy to cultivate.

I have to admit that the only specimen that I have seen of this plant was one that was rescued from a Waterberry tree that was blown down near the Mngeni boardwalk. They are very difficult to spot because they are found in the upper branches of mature trees and are a small fan-shaped, succulent-looking orchid. They are also rare and unlike most epiphytic orchids, have thin roots. Usually, just a single flower spike for each plant appears in February and points upward. The smallish white flowers are further hidden by greenish bracts so are really difficult to spot.

Another species that is reputedly easy to cultivate. This orchid grows erect on the tree branches and is reasonably robust. Like C. arcuate, this species also tends to occur in fairly large clusters. The flowers of the zuluensis sub species, which is endemic to KZN, have a strongly curved spur whereas the main species, which occurs into tropical African regions, has a straight spur. The flowers are smaller than C. arcuate. They are waxy-white on opening and slowly turn apricot-orange as they age.

I have left my favourite to last. I am not even sure why I favour this one, but it may have to do with the fact that it always provides a surprise. It generally occurs in groups but has no stem, so can be easily overlooked until the flowers appear – in WINTER!  The creamy coloured flowers have long yellowish spurs and remind one of tiny dancers. Certainly this species is not fussy: plants are found on a variety of host trees from hot humid areas near the coast to far cooler, mountainous areas inland. They also grow in deep shade as well as in bright exposed conditions.

Sadly, in recent years we have lost several of our large swamp forest trees, some to polyphagous shot hole borer, some to bracket fungus and some for an unknown reason. But, should  you happen upon a newly fallen tree do look for orchids on the branches and if you spot them, please contact our Environmental Manager Ayanda Duma on environmental@simbithi.com, so she can have them rescued and reattached to suitable younger trees nearby. That way, they will be enjoyed for generations to come.