Party Time on the 8th 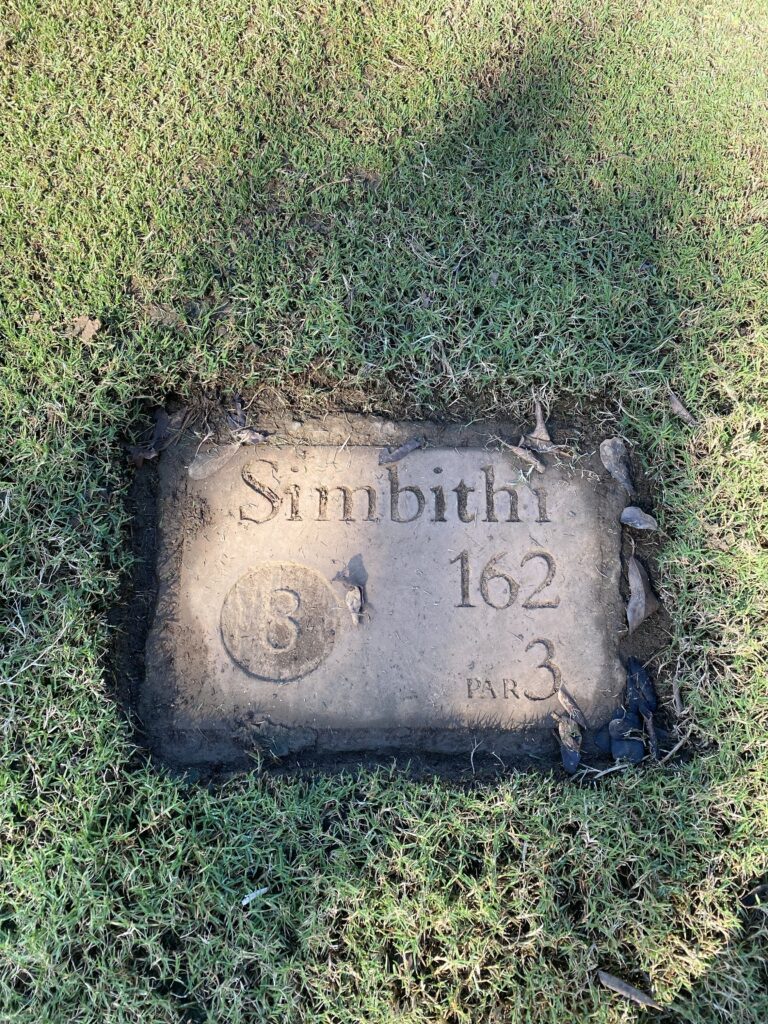 Coffees and clubs – as always. That’s how Golf Manager Thomas Raatgever and Pro Shop Manager Brendan Erasmus head down to the course on an exquisite Friday morning. In this edition, our two golf pros are breaking down the science of the eighth hole. Let’s go!

Thomas, mug in hand, hops into the golf cart while Brendan grabs a flask filled with java. “I need a proper boost to get going,” he says, on the short drive from the golf cart parking lot to the eighth hole. Both pros agree it is rewarding to be back on course after the recent floods. Thomas shares the good news that, while the course did sustain some damage, it held up remarkably well.

Playing the eighth might seem deceptively simple but, as the pros consult on the best club and shots to employ, they caution that there is certainly more to this than meets the eye.

The 8th is named ‘Shebeen’. “Time for a party,” Tom winks, as he engages in a few practice swings. Once upon a time, when the golf course still formed part of the Ladlau’s farm, it was here, in a hidden clearing in the middle of a cane-break, that the farm’s informal, illegal and (very popular) distillery and pub existed. Legend has it that “potent home-brew was made and sampled” from this spot.

This hole is a par 3, a standard golf hole where an advanced golfer is expected to get the ball into the hole within three strokes. If you do this in less than three strokes, you have made ‘birdie’.

On the 8th hole

Depending on the tee markers, this hole plays anything from 150 to 170 metres to the middle of the green. Tom is up first and spends a few moments planning his shot. “On the eighth, you are playing downhill with bunkers guarding the bank on your right and the hazard, water, on your left,” he explains. “If you are nervous about the water, you want to try bailout to the right. This is not a hole where you can be short with your shot.”

Tom prefers to hit a ‘fade’, which is when the ball moves from left to right in the air. “This allows me to aim at the middle of the green and, if I bailout, I have a better chance of the ball hitting the bank and rolling onto the green.” Given his experience, this is a brilliant shot for an advanced golfer to attempt…and, of course, he aces it. Not without a quip from Brendan, who good-naturedly chirps that the shot was “not bad for a stiff ballie!”

While Tom jokingly invites Brendan to better his shot, the younger pro shares a piece of advice from his ‘golden book’, as he calls it. “Often, this hole doesn’t play as ‘downhill’ as it looks, so many golfers come up short on the eighth,” he says. “On a day like this, it’s tough to judge the direction of the wind with the trees and banks covering you. So, a smart golfer will pay attention to what the wind is doing on the seventh hole. This will help you with club and shot selection for the eighth.”

While they banter, Tom and Brendan agree that golfers should keep it simple on this hole. “Stick to your stock shot,” Brendan tutors. “Don’t try to force anything. If you’re a beginner or average golfer, play towards the right edge of the green and keep your shot clean.”

As Brendan gets to grips with his second shot from the bunker, Tom explains that the recent downpours have had an effect on the bunkers. “With the runoff, the bunkers collect silt which changes the consistency of the sand. If you’re golfing after rain, take a careful look before you play your shot.”

If the pin is on the left of the green, says Brendan, and you have bailed out, the ball will naturally roll downhill toward the water. “Still, this is an intimidating shot for the average golfer. You need to try to use the slope and hope for the best.”

Tom also shares an interesting fact about the grass on the green, as he prepares to putt. “This green generally slips from right to left as you are facing it, and you’ll notice a slight camber toward the water,” he slides the ball in, seamlessly. “What also helps is looking at the grain of the grass, which direction the grass is growing in. Often, grain grows toward the water or the morning sun. On this green, parts of the grass are growing in the opposite direction.”

A great way to evaluate the grain is to look at its shine. “If the grass is dull, you are playing against the grain. If it’s shiny, you’re down the grain. This particular line is going to hold my putt up, well.” Aim left, Tom advises.

If you do end up hitting your ball into the water, you would take a penalty from the point of entry using two club lengths from the hazard. Again, Tom and Brendan advise playing this hole thoughtfully. “As with most holes on Simbithi, don’t underestimate the eighth. It is not a typical par three,” Brendan loads his clubs back onto the cart. “The slopes can make this hole really tricky, so you need to plan your shots well.”

As always, the pros make sure to fix their pitch marks and any others they see on the course. This is good golf etiquette, which we encourage our golfers to follow.

Bunker: a specially prepared area on a golf course which tests a player’s ability to play a ball from the sand. Also called a sand trap.

Hazard: an area of the golf course which presents a difficult obstacle. Generally, one of two types: a water hazard, like the dams on our course, or a man-made hazard like a bunker.

Bailout: when a golfer plays a shot deliberately aimed away from the target to avoid a hazard, or any other ‘trouble’ spot near the target.

If you are interested in golf lessons, pop into the Pro Shop to chat to Thomas or Brendan or call 032-946 5407/ e-mail golfpro@simbithi.com or sportsman@simbithi.com