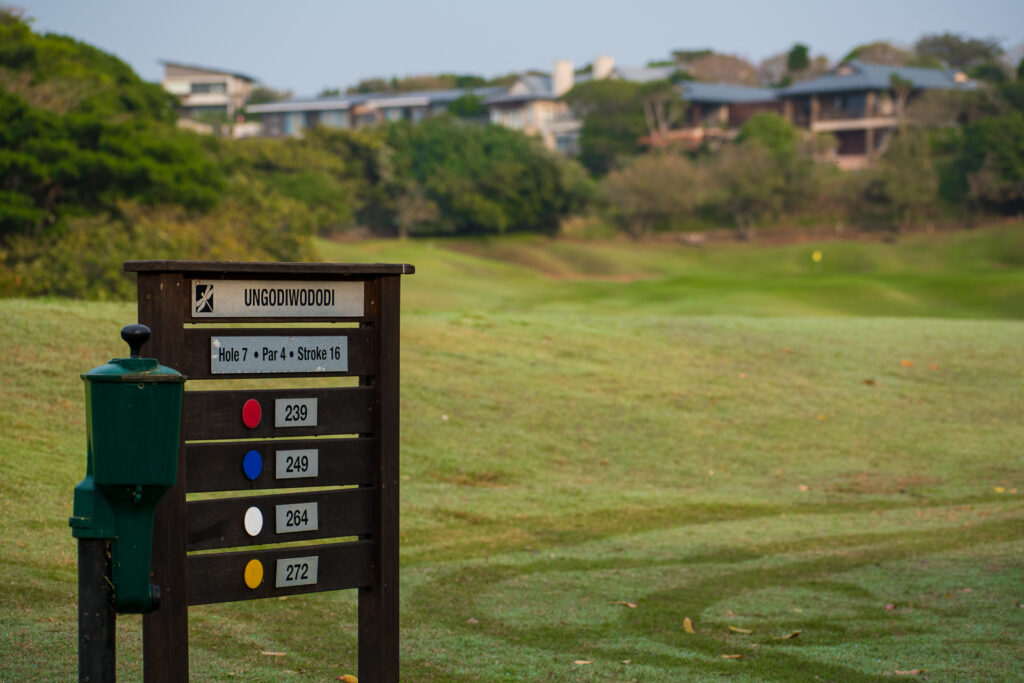 In our last edition, we partied on the eighth hole and now, in Spring, we take a step (or a quick reverse in the golf cart) back to the hole number seven. As our Golf Manager, Thomas Raatgever, shoulders his clubs and strides out of the Pro Shop, the discussion of which hole to explore begins. As we glide under the lash canopy of coral trees near the first tee, Tom stops at the seventh and decides today…we’re going to get lucky!

Let’s break down the science of hole seven.

Tom steps onto the tee holding two clubs, one, a driver. “Beautiful hole,” he remarks. And it certainly is. Our course is in immaculate condition, thanks to Head Greenkeeper Amos Sibiya and the team from Matkovich Turf Maintenance. While he selects his driver and practices his swing, Tom shares a few useful tips on body movement in golf.

“To hit a convincing swing, you need to pay attention to, and use, your entire body,” Tom says. “Many golfers concentrate on the upper body movement only, but it extends down to your legs, so getting your stance right is crucial. If you swing with your upper body, and leave the lower half static, it’s almost like throwing a punch and then pulling it back,” he jokes. “The key is to distribute your weight properly, and then, when you swing, your whole body will drive your swing.”

A stiff body does a golfer no favours and, as Tom quips: “a ball has no brains”, so a golfer needs to decisively tell the ball where to go. “Allow your whole body to move and the ball will follow.”

The 7th is named ‘Ungodiwododi’. (Try saying that after an hour or two at the Drop Zone Bar!) Roughly translated from isiZulu, this means ‘garbage pit’: on a farm, workers would generally dig a hole and fill it with rubbish, which would often be burnt when the hole was full. The hole or pit was referred to as ungodiwododi. It is still a common practice.

This, then, would confirm that hole seven is located where the Ladlau farmworkers would dump the farm’s rubbish with a view of Salt Rock Beach in the distance.

This hole is a par 4, a standard golf hole where an advanced golfer is expected to get the ball into the hole within four strokes. If you do this in less four three strokes, you have made ‘birdie’. If it took you more than four strokes, you would make ‘bogey’.

On the 7th hole

The seventh hole plays a minimum of 264 metres to the centre of the green. “It typically requires a driver ball, and it’s a really enjoyable hole for the big hitters,” Tom grins as he squares up with his driver. Driving the green, Tom shares, is dependent on the position of the flag. “As with most of the holes on our course, the seventh requires contemplation. Don’t just walk up and swing, think about your shot and plan it carefully,” Tom advises.

“Your best bet is to give this hole a full, solid crack at the green,” Tom shades his eyes as he looks ahead before teeing up. “One of the most common mistakes I have seen golfers make on this hole is hitting their shots too close to the green. This leaves them without a full second shot, which makes it very difficult to control the ball,” He smacks his shot squarely down the middle of the green. “This tee shot is fairly wide and not too difficult if you’re warmed up and you concentrate.”

Tom recommends approaching the seventh one of two ways: “either, you hit it comfortably and confidently, playing a decisive driver shot that gets you to the green, or, if you’re a little apprehensive, play a shot that gives you enough slack to have a full second shot.”

Depending on where your ball lands, the second shot could either give you a nightmare or be an absolute dream. “The second shot will likely play uphill, against the wind,” Tom gestures at the green, which is uniquely designed. “From the first shot, there is not much depth to the green and it is protected by three bunkers when you face it.” The green is narrow and long, which can prove tricky on your second shot. “It can be difficult to judge the distance, if your ball lands to the right of the green…you won’t be able to see much of anything and you will swing blindly.” Tom walks over to the left of the green. “If you’ve played to the left on the first shot and your ball lands on the left, you will have a far better view of the green and be able to judge your second shot.”

If you are interested in golf lessons, pop into the Pro Shop to chat to Thomas or our Golf Pro and Pro Shop Manager, Brendan Erasmus or call 032-946 5407/11 or e-mail golfpro@simbithi.com or sportsman@simbithi.com.