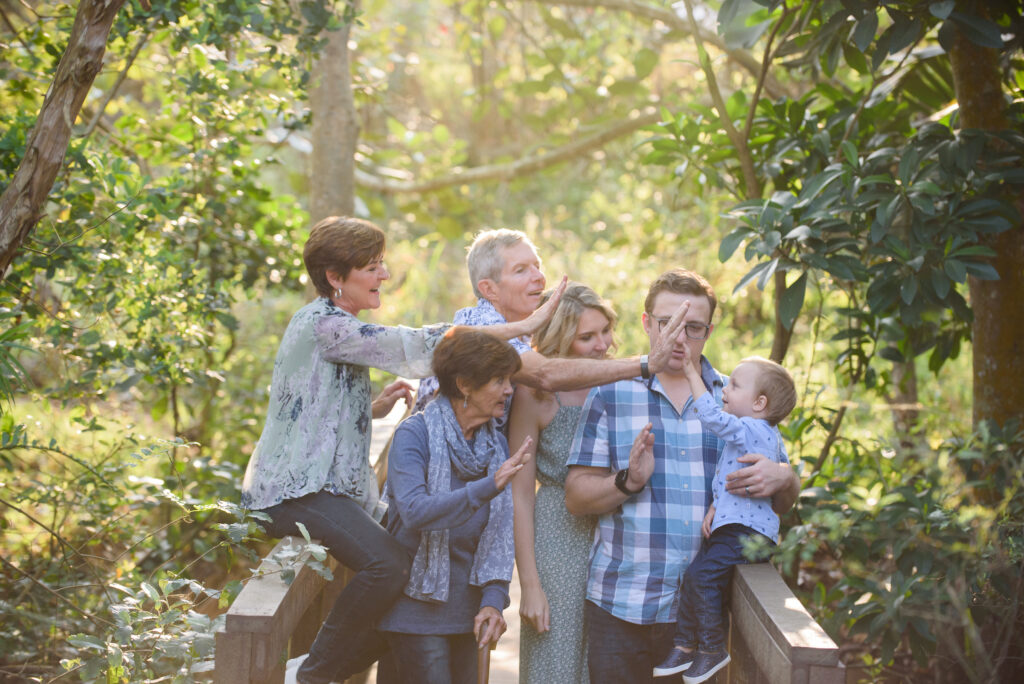 How many times have the millennials among us (including myself, here) heard those words, quickly followed by the multitude of things the world of yesteryear allowed: like being within walking distance of our grandparents’ homes, weekly family dinners and playing outside until our parents called our names? How wonderful, then, that the Anderton-Dearling-du Preez clan has made this a reality on Simbithi? In this edition, we meet four generations who have chosen to call Simbithi home.

Jack du Preez, a few days away from his second birthday, is hesitant as he toddles into the Fish Eagle Community Centre. His button-down shirt accentuates his bright blue eyes, and his blonde hair has been swept to the side, just like Eric, his father, whose hand he is clutching. “Mama,” he thoughtfully turns around, in time to see Ashley appear with his box of snacks.

Satisfied, Jack totters forward and his little face splits into a grin: “NAN!” He exclaims, rushing forward to grab his grandmother, Terry Dearling, and insist she takes him on a walk around the Centre. He gives his grandfather, Tony, an approving nod as he regards their matching shirts. Before Jack and Nan set off, he says hello to “Tutu”, his great-grandmother, Irene Anderton, who gives him a fond smile.

As he looks on, Tony begins the tale of the family’s migration from the hustle of Johannesburg to the leafy streets of Simbithi. The Dearlings already had a relationship with the North Coast, with their holiday home in Sheffield. “We would come down, often,” Tony shares. Ashley, unwrapping a muffin for Jack, chimes in: “though, I never imagined myself living on this side of the world.” Terry, however, remembers a promise she made to her father. “I always loved our holidays here and I promised my dad that, one day, we’d live here permanently.”

When Dave and Irene first scouted property in what is now Savanna, it was, as Irene gracefully puts it: a “cold, we and miserable day”, which Tony laughingly agrees with. “There was just sugarcane, everywhere, and we stood in pelting rain,” Tony remembers. By then, Dave and Irene were living in the Dearlings’ holiday home and Dave was keen on a move to Simbithi. So, he attended the launch of Savanna. At the time, Tony was at Makro buying three cases of wine…curiously named ‘Savanna’. “I asked Dave which unit he got, and he said 36 Savanna. When I looked down at the thirty-six bottles of wine, I saw it as a good omen!”

In 2008, Dave and Irene became Savanna’s first residents with Colin and Gay Taylor. “It was still a building site,” Irene remembers. “But, already, the sense of community was there.”

It was during a dinner date with former director and well-known Simbithi resident, Paul Sparks and his wife, Dawn, that the Simbithi bug bit Tony and Terry. “Terry mentioned that she had fallen in love with their home. Paul mentioned there was a stand close by that might suit us.”

And, so the story begins. With Paul and Dave project managing, Terry and Tony began building their home in Honeysuckle Lane. Dave’s vision now sees the Dearlings able to live off-grid, with solar power and ample rainwater harvesting systems. They were able to assist many residents during the recent floods.

Dave, sadly, passed away just days before the ‘fences down’ on the property. By then, Dave was renowned within Simbithi, Irene remembers. “I have a photograph of Dave ‘opening’ the Drop Zone Bar with Elbert, our former golf pro, before it was officially opened. To my knowledge, he’s still the only golfer with two holes-in-one on the first.”

Terry moved into the home soon after and, according to Tony, “never moved back” to Jo’burg. He continued to commute for three years and their daughter, Ashley, an occupational therapist, also soon found her way to Ballito once she completed her studies in Cape Town. Here, she met young doctor Eric du Preez. The couple shares the enchanting way their paths almost crossed in 2010, five years before they actually met, when Dave was undergoing heart surgery. “I posted on my Facebook about a surgery I was excited to observe, and, on the same day, Ash posted her thoughts about her grandpa undergoing surgery,” he smiles. When the couple compared Facebook memories years later, they discovered that Eric had indeed assisted in Dave’s surgery.

Ashley and Eric started their Simbithi journey in Ilala and now live in the family-oriented Amphitheatre complex…almost precisely central to the rest of the family. “My gran hops onto the golf cart from Savanna and, if we aren’t home, she keeps driving until she gets to my mom,” Ashley shares. “And, if Jack and I are upstairs and my mom leaves home to come and visit us, we can watch Nan coming down the hill to our house!”

Family dinners are a must for the family, every Tuesday evening. “It’s a recurring event booked in everyone’s calendars,” Terry smiles. Ashley makes a face, joking that Simbithi should consider changing the dates of our wine tastings. “It’s the only time I see a cancellation for family dinner!”

Ashley and Eric enjoy their home immensely and find life on Simbithi tranquil and relaxing. “I have never lived anywhere else where, during times of crisis like floods, unrest and widespread electricity outages, a group of moms will mobilise to help each other out,” Ashley shares.

Irene says she and her beloved Dave made some of their fondest memories in their Savanna home. “He always loved Simbithi and said they would carry him out of here which, in the end, they did,” she reminisces.

Fulfilling her promise to her father to live on the North Coast certainly filled Terry’s cup, as she spends her days as a life coach. She is also a pivotal part of Simbithi’s community social investment involvement with Partners for Possibility. What she enjoys most about Simbithi, though, is the sense of belonging. “There’s something for everyone, here. Simbithi offers everyone, no matter what stage of life they find themselves in, so much. Within this space, you can truly be the best version of yourself.”