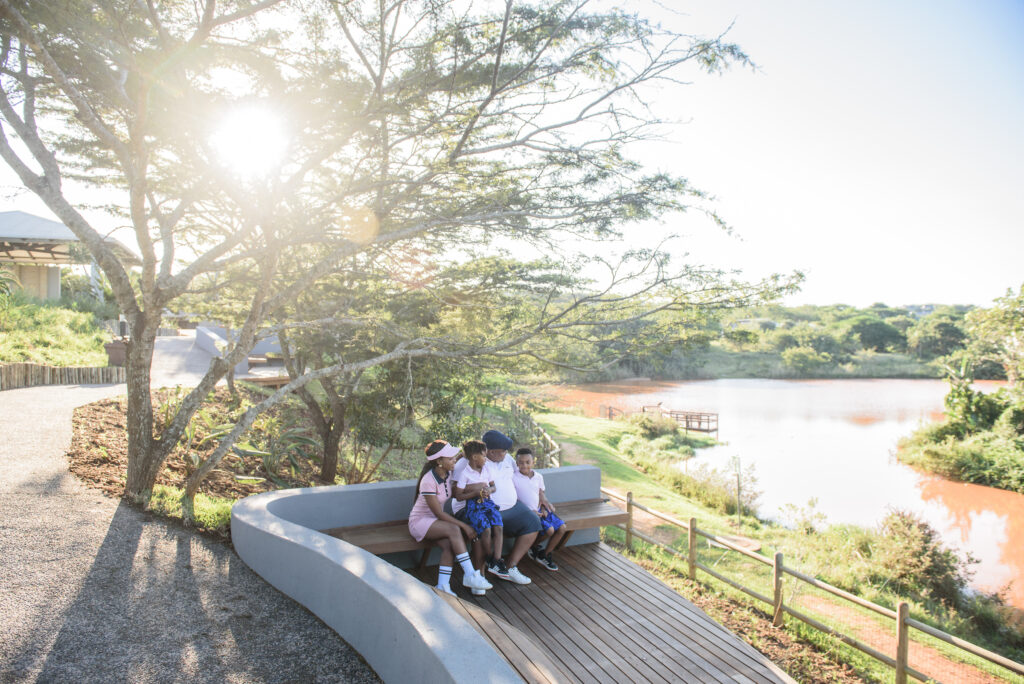 It started out as a campus love story and blossomed into a novel of adventure, fun and family. In this edition, we meet Mrs. South Africa semi-finalist Andile Pieterson and her three handsome boys.

Was it love at first sight?

“Yes!” Peter answers without a second of hesitation, briefly running his hand over the delicately inked ‘Andile’ on his forearm. “For me, definitely. I first saw her fifteen years ago when we were both studying at the University of KwaZulu-Natal”.

Andile agrees that the connection was instantaneous, and the couple jokingly goes back and forth about who made the first move. Eventually, Andile concedes that she approached Peter first, smiling up at him while their two sons gleefully get stuck into scoops of ice cream from the Heron Pizzeria. “We dated for a while and then, once the lobola had been paid, we had our traditional Zulu wedding in 2014,” she reminisces.

The couple’s first son, Jaden, was born in 2015 and his little brother Jesse followed in 2016. The Pietersons tied the knot in a white wedding ceremony in 2019 and moved to Umhlanga. Andile, who is from the South Coast, had always had an affinity for northern KZN and soon, the family decided to scout property on the North Coast. “I prefer the peace one finds in the north,” Andile says, as she helps Jaden to a slice of fresh, wood-fired pizza. Peter chimes in, explaining how their property searches led them to Simbithi. “Simbithi kept coming up whenever we looked. I was keen to experience life in a gated estate, so we started looking at properties, here.”

Their home in Jacana is cozy, intimate and well-located for Peter, who runs a logistics company in Durban and Andile, whose optometry practice is close by. Andile and her twin sister, Ayanda, also an optometrist, run a charity organisation called ‘Twins on Eyes’, which involves them visiting underprivileged schools to perform free eye examinations on learners. “Many times, we find a child struggling at school and you’d be surprised to see how many are just battling to see properly. By encouraging regular eye testing and showing them that wearing glasses is not a disability, we can improve eye care in the younger generation.”

Andile’s philanthropic side bodes well for her entry into the Mrs. South Africa pageant. She decided to enter after realising many women were finding it difficult to navigate life amid a pandemic. “It was taxing emotionally. We had to be mothers, wives, teachers…it was a lot, and the anxiety seemed to be increasing. I thought this would be a great platform for me to reach out and empower other women.” Now that she has progressed to the semi-finals, she has her sights set on the finals and, of course, bringing home the coveted crown. “For me, it’s about reminding women that we don’t have to let go of our dreams after we’re married. It’s not just about modelling or walking on a ramp. It’s about bringing awareness to the things we, as women, care about. And, I would be grateful for the chance to grow the Twins on Eyes foundation. If we, as women, believe in ourselves then the possibilities are endless.”

The Pieterson family has taken to life on Simbithi seamlessly. Aside from the comfort of security, Peter is enjoying the proximity to the golf course and Andile is mildly obsessed with the Fig Tree Restaurant’s seafood platter. They are particularly fond of the close-knit Jacana community. “Our children are socialites,” laughs Peter.